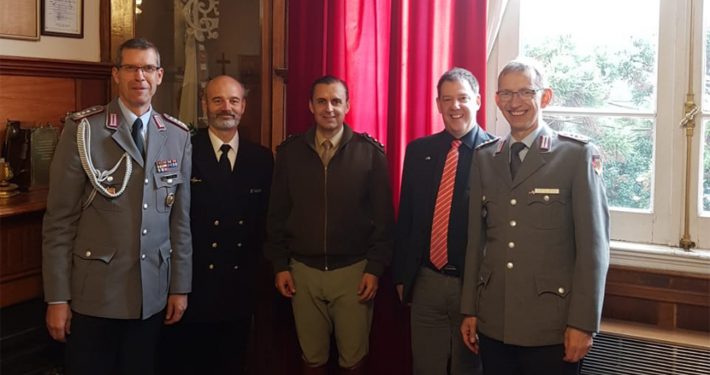 As a follow up from the GIDS Alumni Conference on 25 September 2018 “Critical Infrastructures and Climate Change – Challenges for the Security Policy: South American Experiences as a Model for Germany?” several institutions of the Argentine armed forces invited the GIDS to a return visit to Buenos Aires.

Under the headline “Climate change and its impact on defense policy” the Universidad de la Defensa Nacional (UNDEF) organized this bilateral conference where Prof. Dr. Stefan Bayer and Colonel (GS) Prof. Dr. Matthias Rogg provided lectures, complemented by the Argentine position of Commodore (ret.) Tabolini. The very engaged discussions with scientists and military personnel made it clear that the role of the armed forces must be re-evaluated creatively as a critical strategic new field of operation.

At the Escuela Superior de Guerra Conjunto de las Fuerzas Armadas (ESGC), the sister academy of the Führungsakademie of the Bundeswehr, the topic critical infrastructure was elaborated with diverse contributions. After Colonel Rogg presented the GIDS, Prof. Bayer offered an impulse on strategic thinking by linking economic aspects with safeguarding ​​critical infrastructure in Germany.

The great deal of interest in these topics and the outstanding reception of the German delegation was underlined by a lecture given by Hugo Dario Miguel (State Secretary in the Ministry of Modernization) and Alberto Parodi (Secretary of State for Cyber ​​Defense in the Ministry of Defense). Both State Secretaries described a detailed picture of the current political debate in Argentina. It became clear that only comprehensive approaches contribute to sustainable success and how important empirical research is the foundation to develop new strategies.

Finally, the commander of the ESGC, Coronell Major Gabriel Camilli provided an overview over his institution. This all was gratefully supported by the FüAkBw alumni network, namely Capitan de Navio Carlos Falcone, Scientific Program Director of the ESGC and graduate of the LGAI 2014 in Hamburg.

At the Hospital Militar Central, the central hospital of the Argentine army, Commander (N) Dr. Christian Haggenmiller gave a talk on “artificial intelligence and security policy implications in the field of biosecurity” which particularly appreciated by the host as this presentation was held in Spanish. This also triggered discussions and background discussions with the hospital leadership which unveiled many common interests and options for future exchange of information and cooperation.

Visits to memorials and military-historical museums

The impressions were complemented by a couple of visits to memorials and military-historical museums, such as the Museo de las Armas in the Circulo Militar and the small but exquisite museum of the Argentine armed forces’ historic regiment “Grenaderos a Caballo”.

The remarkable historical collection exhibited there had a focus on General José de San Martín, the most important military figure in the liberation and independence wars of some South American states at the beginning of the 19th century. Notably, to see the great effort and enthusiasm, Argentina is spending to cultivate the tradition and history of its rather young armed forces here.

In contrast to the heroic historical images was a visit to the Escuela de Mecànica Armada (ESMA), the technical school of the Argentine Navy, which served in the period of military dictatorship from 1976 to 1983 as the central institution of the terror regime. Currently, ESMA serves as a site not only to commemorate the victims (“desaparecidos”) but also an independent institution contributing for research and contributes to accounting the past.

In fact, slightly more than a third of all cases could be investigated due to ESMA’s documentation and research which allows trials against the perpetrators up to recent times. The continuation of this research and effort is essential to reconcile the national trauma in which the armed forces played an important role. The ESMA memorial site is a remarkable place to learn contemporary political history: a must for every visit to Buenos Aires.

The GIDS takes many impressions and insights back to Germany:

The GIDS as a Cooperation Project